This morning I had a doctor's appointment in Clarksville (to the west) and, driving there, I saw the FIRST FALL COLOR in the tops of the street trees. :) Red and orange maples of some kind were planted along the neighborhood streets between the Interstate and Rte 108 where the doctor's offices are. So pretty! It was sunny out there but by the time I got to Catonsville, it had clouded over and was spitting cold fall rain. :P

The doctor I went to see is a foot specialist. My left ankle has been hurting pretty badly for about three weeks ... and the doctor told me I have 'acute achilles tendonitis'. (sigh) I _thought_ it might be Tarsal Tunnel which I have had for years (the foot equivalent of Carpal Tunnel in your wrists), for which I wear shoe lifts. I also thought he'd likely give me a cortisone shot for the inflammation.

Thankfully, no shot ... it's not the usual complaint. However, now I'm BOOTED for the next four to six weeks: 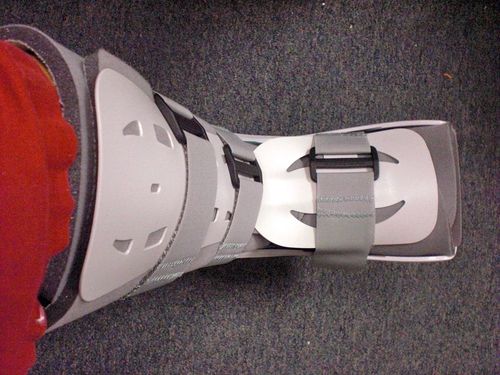 Isn't this thing just charming (NOT!)? :P It is essentially a walking cast that immobilizes my ankle so it cannot flex - that lets the tendon be still and heal. I hope it heals fast (but my history with various areas of tendonitis is not too great - takes quite a while to heal).

I've been fiddling with what should have been a simple design for my shop. In November, as part of the Quilter's Quest, we will be selling shop pins (those lovely enameled pins that quilters collect). I thought it would be good to have a pattern/kit for a pin holder quilt so I've been working on making a sample.

Today I finished the last block for a sample that has 5" blocks ... and decided (with some prompting from Alice I. and Robbyn) that it is too large. (sigh) So, back to my rulers and rotary cutting to make smaller ones. Here is a line up of the three sizes I've made (all in purple fabric - I'm doing a full rainbow):

The center block has  a pin on it for size reference (the pin is about 1" across). I like the tiny spool block best, but I'm going to go with the middle sized one (a 3" square) as you can get at least two pins on one spool. Aiming for a 25 block hanging - at about 18" square, it should be cute (fingers crossed)!

I have many other things I would rather be working on, so I'm going to spend a few minutes figuring out how to make these babies with strip piecing and strata subcutting instead of block-by-block. :)

Sorry to hear that you have to wear that cumbersome boot for 4-6 weeks. I guess, at least, its not a cast and you can take it off at night. Take it easy and let that ankle heal! Your spool quilt blocks are wonderful-- I love the orange and the purple fabrics you selected. The pin looks great on the purple. We don't have a lot of fall color here, just yet. I think it might end up being more of a brown year, but I'll have to wait and see. Best wishes for a speedy recovery on your ankle!