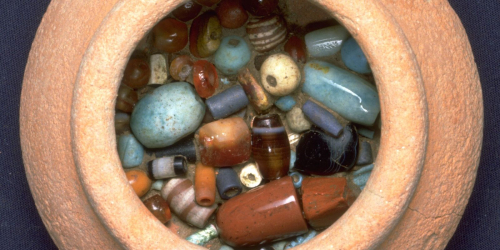 Have I ever mentioned how much I like beads? :) I like to play with them, make things from them, embellish with them ... and study history through the eyes of making them. :) If you click  on the photo above, you can go read about bead making in India more than 5000 years ago ... and how following the trade routes helps learn about the people of that time. :) I find this stuff fascinating.

This past week has been full and quiet by turns. I finished my burial-related items by arranging for in-ground stones for my two brothers (both of whose ashes will be buried with my parents). I caught up-to-date with my bariatric class obligations (driving to a class that was held at 6 p.m. on a Thursday evening an hour's drive north of me was an adventure in rush hour traffic navigation). I sent birthday gifts to my grandson, O, who turned 5 on the 22nd ... and to my youngest sibling, my brother, Kevin, who was born on my birthday when I was eight.

Sixty-seven years ago last Saturday my mother gave birth for the first time. She was a young college woman of 20 and getting married/pregnant put a halt to her classes for a while. Back in those days - at least in the nursing program at Berea College - married women and/or young mothers were  not allowed to attend classes. Thanks Be that things have changed since then!! I was born a month early and was pretty small, I guess, at 5 1/2 pounds (especially in those days).

When I was a young mother, the sharing of birth stories was encouraged  and I've heard any number of them (all of them give me a warm heart, even now:). I don't think that the same was true at the time when I was born (1952), certainly not in small town Kentucky. I never heard my mother speak of her experience with me ... sometimes I wonder how things were for her. Birth preparation classes were, as far as I know, unheard of back then. She _was_ training to be a nurse so surely had been present at births before. She was the oldest of eight children and probably had some exposure to birth at home (though I have no idea how the mountain culture she was born into treated such things). Was she frightened? Excited? I have no idea.

I do know that I was a much-loved child. Not only by my parents but by their siblings as well. I am the oldest child of my generation on both sides of my family and my aunts and uncles were all kind to me throughout my childhood. In many ways, I had a golden childhood. :) The fact that I did not choose to raise my children in the same way as the culture I was born into would have done does not change the happiness of my early years. :)

So I spent my birthday this year in my nightgown for the entire day. Rather than go out to dinner, we ordered in (Chinese, and tasty:). I did exactly and only what I felt like doing all day - read books, played solitaire, watched two movies (Suicide Squad and The Dark Tower) ... generally just 'hung out.' Fun! I did not sew because my sewing area has tipped over into outright chaos over the past month. I have a LOT of picking up to do. Sigh.

When I do get back to sewing, I want to double down on finishing the piecing of my thistle and leaf project. I have to decide what the third 'icon' I want to include should be - the lovely pear design I found in Simply Moderne magazine or the Banana Leaf motif that Elizabeth Hartman recently released: 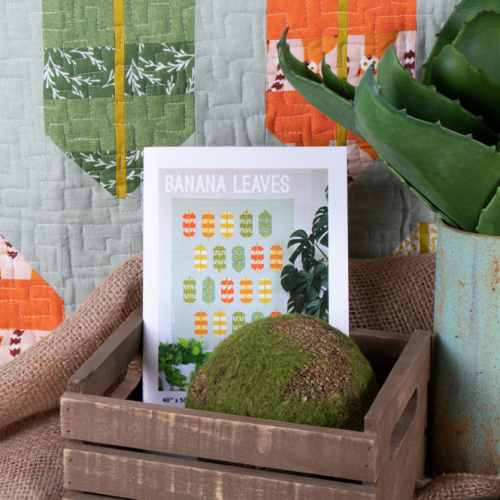 The banana leaf would go along with the other two EH designs I'm already using ... on the other hand, it might be too many leaves, eh? :) I haven't decided, yet, so I will probably back-burner that project for a few weeks to explore alternatives. :)

Last Friday all three of us, Barbara, Patty and I, met to sew together. I was working on my ever-progressing 'modern crazy quilt' embroidery. I only have four more fabric patches to work on ... but I keep thinking of ways to add to already embroidered areas. :) I am sensing a little bit of finishing reluctance on my part. Hopefully I can get past it to complete my work.

Yesterday (Monday), the Wool Club at Springwater Designs had our monthly meeting for November. Heather shared with us the pretty new things she picked up at Quilt Market in Houston last month, including a new wool designer, Mary Blythe. We are going to work on one of her patterns during our next club series of meetings (January through May?). I bought her new book while I was there Monday - there were a number of ideas and designs in it I really like. :) I want to finish making my modern crazy quilt (at long last - it has been my carry-around project for several years now:) so I can start some new handwork.

Thanksgiving will be a quiet day for us here at chez Schiffer. The three of us will have our meal and review our blessings. I have a LOT to be thankful for, as always.