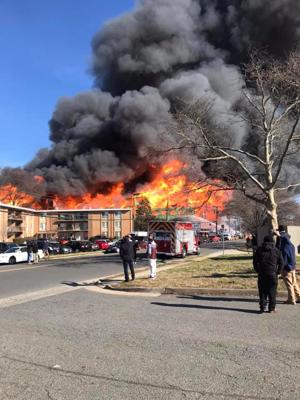 Today was bright and sunny in the morning but got cloudy by evening. The wind died down from yesterday (thank you!) so the sunshine felt lovely. I had as close a brush with catastrophe as I can tolerate this afternoon. NO, I'm fine but Barbara and I got to witness (from a distance) a very large fire. Here's how it happened.

Today is the second Saturday of the month and thus the regularly scheduled meeting of devotees of handwork at Jinny Beyer Studio in Great Falls, VA. Barbara and I met early today - around 10 a.m. - to drive down. Well, as usual, Barbara drove. :) We left early so we could stop at a new-to-us fabric shop in Alexandria that Barbara found about from an ad in the Country Register newspaper. Called The Fabric Place Basement, it's on Route 1 in the Beacon Center shopping area (behind Panera Bread). We went to look for fabrics with texture and touch appeal.

We have a mutual friend who is suffering from the first stages of Alzheimer's Disease. She (the friend) is a lover of bright colors ... and a long time quilter with a big heart. Our group decided that we would make a lap sized 'fidget' quilt for her using assorted textured fabrics and colors ... and since neither Barbara nor I use anything other than quilting cottons (for the most part on my side:), we needed to shop.  It's a really good thing we left early!

We took 95 south to the Baltimore-Washington Parkway and then to the Washington Beltway toward Alexandria (around the east side of D.C.). From as far away as the parkway we could see a huge column of dark smoke rising straight up into the sky. There are no factories or other legitimate sources of smoke in that region so I kept my eye on the smudges while Barbara negotiated the traffic. I could see flames rising up at the bottom of the column of smoke from quite far away. As we got closer to Alexandria, it became obvious that the fire was directly near where we were going (following 'she who must be obeyed,' Barbara's car GPS.

By the time we got off the highway and onto Route 1, we found the road closed and traffic was being detoured around the center of the business district. I could clearly see the fire - biggest one I ever saw - raging in front of us. The photo at the top of this post is just one I pulled off a news network story. You can go here, here, here and here to read more about the event.

We ended up crushed into traffic along with everyone else who had thought they'd drive down route 1 past the business district. Things were a bit uncertain since many of us had no idea where we were to go ... and others knew the local roads and were darting around on alternate tracks. Barbara kept her cool and we managed to convince the GPS to avoid route 1 to find our destination ... and finally arrived. The cross road we ended up taking was, luckily, the southernmost boundary of the road closing.

Our arrival at the store was almost anti-climactic after all that! I was pleasantly surprised by the shop - it was clean and bright, the staff was uniformly friendly and helpful, and the prices were much lower than I expected (like batik fat quarters were $2.50 and 'regular' fat quarters cost $1.99 - whereas the typical quilt shop prices in the region are $3.50 for a fat quarter). They had a nice quilting fabric area - not latest release prints but plenty of decent quality. Lots of luscious garment making fabrics. And a surprising number of remnant bins. Barbara and I found more than enough 'texture' fabrics to get in trouble. :)

The fire was still being tended (five alarms!) as we left so we carefully GPSd our way westward to Great Falls. We took so much time with traffic, we had to eat lunch quickly so we opted to visit Bollywood Bistro again as it is a buffet and faster than waiting for service. As before, the food was spicy and good. We actually got to Jinny's shop with a little time to spare (which gave Barbara enough space to get into 'trouble' with Jinny's flat fold special).

As always, the show and tell was wonderful - but, sadly, I left my phone at home this morning so did not get any pictures. One new attendee brought the first quilt she ever made (25 years ago) and some beautiful hand embroidery she had done - some Hardanger work and a lovely quilt-themed cross stitch piece that I would love to know the source for. :) Barbara took the 'wilderness animals' quilt she finished recently to share. I see that she hasn't written about this one yet on her blog - keep an eye out 'cause the story is worth reading. :)

Poor Barbara - by the time we drove back around the DC Beltway and home, I think she had seen more than enough of the inside of her car. :) Since I got back, I've been lazing around the house, too tired to concentrate on anything meaningful.

Tomorrow is scheduled to contain yet more sewing excitement.