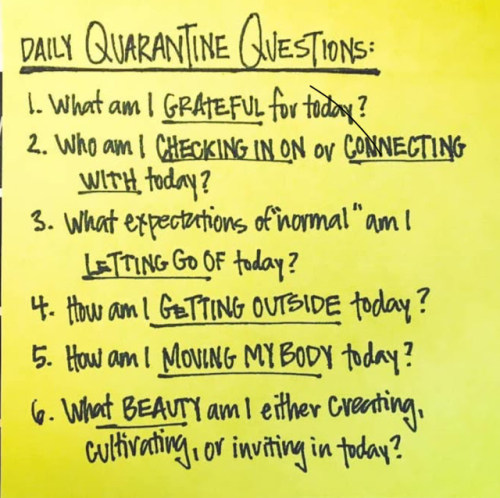 I thought these were good questions to meditate upon daily ... during this very odd time. I can't say I've done very much of interest - well, of interest to me, yes, but hardly historic - over the past five days since I last posted. :)

Last Thursday (Spring Equinox) I had upper g.i. xrays with barium contrast - actually, they were fluoroscope (live) images. The barium (nasty tasting white chalky mixture) looked black on the scope because it impedes the xrays. I got to see my throat/stomach as I drank the stuff and it traveled through me. Fascinating! All wiggly and real, too. LOL.

The point of the xrays was to see if anything was amiss in my stomach area ... and the fluoroscopist said I looked 'highly normal'  - yeah! That was the last hurdle toward my bariatric surgery. Now it's waiting until the surgeon's office calls to set a date.

I am still going to physical therapy. I had an appointment this afternoon. We had to take a step backwards in my treatment because I'm having increased pains in my arm and hands ... today I got to spend a half hour of bliss with a hot wrap on my shoulder, followed by extensive deep tissue massaging. Sure felt better afterwards. :)

I've been reading quite a bit (Illona Andrews' Magic Mage series and Clean Sweep series among other books). I haven't watched much 'tv' as my husband is home, too, and I don't have any headphones/earbuds at the moment (old ones broke) to keep the sound down - he cannot tolerate the noise, poor man, or the distraction.

I have also been working on cleaning my soon-to-be functional sewing room. Almost there but I have to work in measured doses. My stamina still isn't what I would like it to be - half hour vigorously working, hour to recover is the rule right now. :)

I have been especially enjoying reading my blog list lately - it substitutes somewhat for the social isolation. Most of the blogs I subscribe to are for quilting, embroidery, or mixed media arts. I do take a daily look at the abstracts for archaeology research, too, as that is kind of an avocation of mine. Recently two artifacts were found in Indonesia that are the oldest portable art objects ever found - I _think_ they are about 26,000 years old. This one, particularly, caught my eye:

It's about half the size of the palm of your hand and about six inches long. We're not sure what the image is supposed to be - the article writers speculated that it might represent the sun as it is similar in appearance to younger things found in the region. I was excited that it appears to be a hexie shape. :) Apparently there are red pigments still in the grooves - when it was newly made, it probably showed as bright red lines on the stone. No idea what it was for or how it was used. The other one found with it shows a faint image of a big feline of some kind.

I am determined to get my sewing machine up and working tomorrow. Sunday there was a sew-in online for a design that I want to make called Elvira. Edyta Sitar is running a quilt along, too, and I like what it looks like. So many beautiful things to make, so little time!