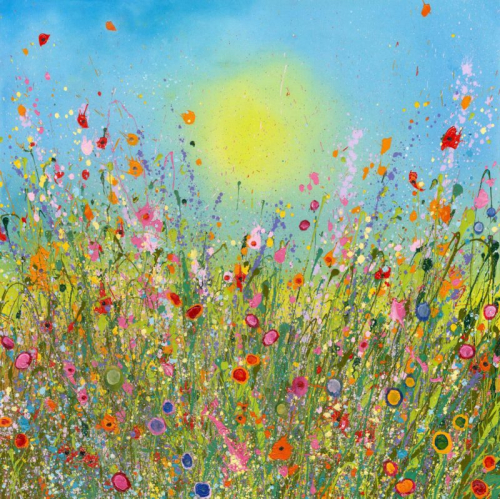 Isn't this a lovely painting? It was made by Yvonne Coomber - I like her work (click on the pic to go take a look at her gallery). Makes me think of happy summer days. :)

I wrote a long-ish post beginning this way three days ago ... and it got lost somehow in the posting process. Made me so mad it has taken me time to cool off and start over. :) Slow temper, slow recovery ... that's me.

What have I been doing? Mostly staying out of the heat/humidity of a Maryland summer - mid to high 90s in temperature, humidity from 75 to 90 percent, mostly sunny skies. Typical July weather. I have done some sewing ... not as much as I would like to do, but some.

I made the two blocks I owe for the Stash Bee (hive 4) July block Queen: 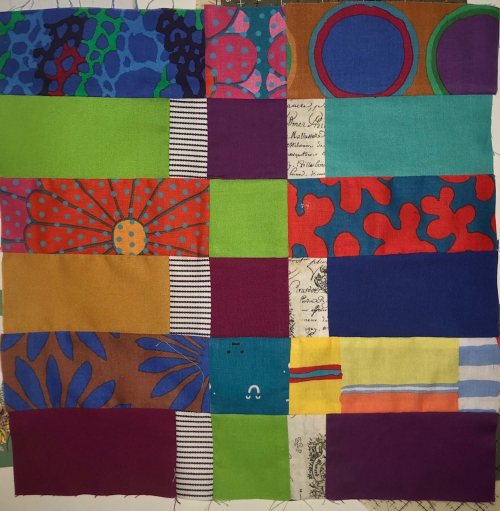 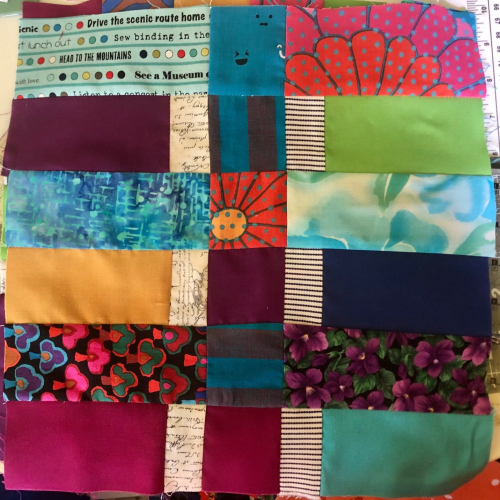 As per her request, these are made (mostly) with scraps. I did dig into some pretty print fat quarters I have in my top drawer for a few rectangles. It will be an interesting quilt - hope I get to see it. :) Hugh mailed my blocks off to her in California when he went for his morning walk today.

I also put a binding on my butterfly wreath quilt on Wednesday (yesterday?) evening during the Baltimore modern guild's Sip & Sew zoom meeting. As always, that was fun.

Also attended two other Zoom meetings this week - Mimi's Grad Class met on Monday morning and Faithful Circle's Monday evening group met that day, too. It really isn't quite the same as meeting face-to-face ... but Zooms do allow members who are far away, geographically, to attend so that's a bennie. :) Always good to see what people are working on. There's going to be a lot of show and tell meetings when all this is finally past!!

I've been cooking a bit ... have decided to move my main meal cooking from evening to lunch-ish - I'm less tired earlier in the day and more likely to actually DO the cooking. :) We have the makings for one or two meals left and then Hugh and I will have to go out grocery shopping again.

I tried to get myself to start in on cleaning in my new sewing area today ... but wimped out and read instead. So much inertia! I want to get it done and move on. Clearly not enough to actually DO it. LOL!