Today was more fun than I expected (have been holding my daily expectations pretty low for several months:) ... this afternoon was the (Zoom) regular monthly meeting of my Sew&Tell group. I say 'mine' but I kind of piggy-backed on these folks over the years - the group began as a set of crafters all of whom worked at Social Security (headquarters in Catonsville near my shop). They began meeting in the classroom at my store at some point and I joined them as several of the members were personal friends. :)

I decided to continue working on the EPP project I started yesterday and it's a good thing I did. I discovered that everything I sewed yesterday was WRONG. LOL. Luckily it was easy to fix - and I've been scratching my head trying to figure out how I could be so out in left field. :)

Here's what I made today: 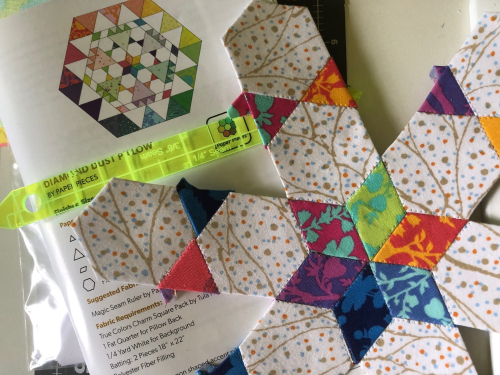 That green strip is the seam allowance ruler I mentioned yesterday - with 1/4" and 3/8" widths. Turns out that English Paper Piecing bits are easier to baste if the seam allowance you cut is 3/8" wide (gives you a skosh more fabric to hold onto and isn't so risky to put the paper template onto evenly).

You can also see in these two photos that Aboriginal print background I chose to use instead of the plain white called for in the original pattern. It didn't occur to me to try to fussy cut the print so the curved lines would radiate or something ... maybe next time. :)

If you embiggen the second photo, you might notice that I went back to machine sewing the pieces together with a narrow zigzag and invisible thread (Superior's Monopoly) instead of hand sewing. I started today's sewing session by basting and laying out the background print hexies and the tiny bright triangle units. When I put the six of them into position with the center I made yesterday, my eyes sort of crossed and I thought - 'this can't be right!?!'

Yeah, no kidding. A CAREFUL look at what I had made yesterday vs the design sketch told me I had made the center completely wrong. LOL. Heaven only knows why I couldn't see that yesterday, before I spent my time hand sewing the big triangle papers together. Sooo, out came Jack (as my friend Patty calls her seam ripper) and I took that all apart (and set aside the pieces to use in the outside border, see sketch).

Those little diamond shapes that were _supposed_ to go in the center were MUCH smaller than the big triangles and much fussier to sew together ... but I managed. :) Now I'm off on the correct path (finger crossed that my eyes aren't haywire again:). We all make mistakes and that is a fact!

Tomorrow I will start on the in between units (see sketch).