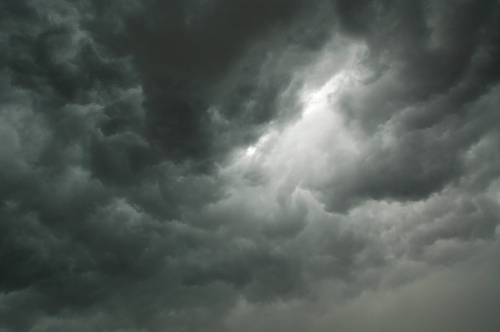 Today was hot, humid and heavy when I went out around 11 a.m. There were black clouds on the horizon and the forecast called for thunderstorms. I had several errands to run and an appointment to keep.

I had ordered a piece of Halloween fabric from Springwater Designs that I want to use in finishing my Poison Bottles quilt - had to stop and pick that up. Then I had to go through the drive up window at Walgreens to pick up some routine meds and grab some lunch (also via drive-through) on my way to Catonsville. I had an appointment with my manicurist for a facial waxing early this afternoon.

I was a little early by the time I got to the salon so I sat in my car to wait out the rain. Just as I parked, rain came pounding down (preceded by more black clouds) for about forty minutes. Gully washing as the saying goes. :) I took the 'big road' way to get to the salon (up Interstate 95). When I finished my date with Irina I decided to take the 'back road' way home (down MD State Route 166 - Frederick Road - and then MD Rte 29). I think of that as the 'scenic route'. :)

We've had a bit of rain recently and the Patapsco River in downtown Ellicott City was a bit high ... luckily no sign of flooding, though. Whew! Lots of walkers around the shops downtown, too. :)

Other than run around in my BoltEV, I did spend some time this evening sewing. The regular Wednesday evening Sip and Sew Zoom get together was at 7 p.m. and I attached the set-it-on-point corners to my Aboriginal medallion project. Eventually I guess I wiil have to come up with a proper name for my piece. :) Here's a photo of its current stage: 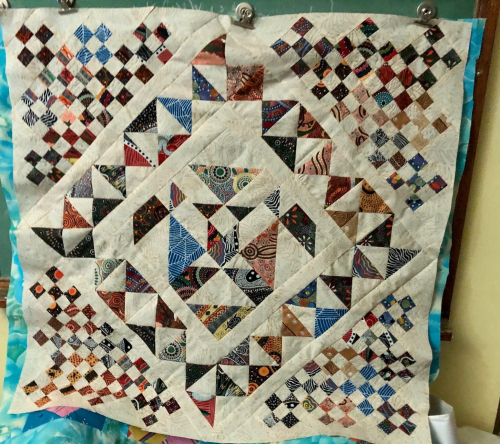 Because I had even numbers of nine patch four- and five-dark patches, the corners are not all exactly alike. I like the setting, though. Not sure what I'll explore for the next border arrangement. Maybe something larger, to reflect the size/scale of the the central patchwork. :) BTW, the piece is actually flat and even though this photo doesn't show it very well. Casual work wall picture. :)

Faithful Circle has a Thursday morning Zoom meeting tomorrow at 11 a.m. Hope I can wake up  in time to attend. :)