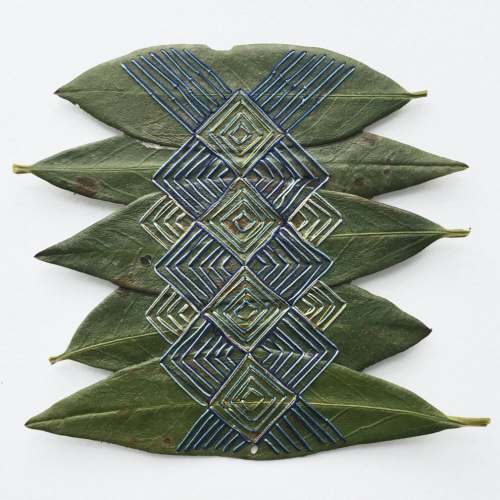 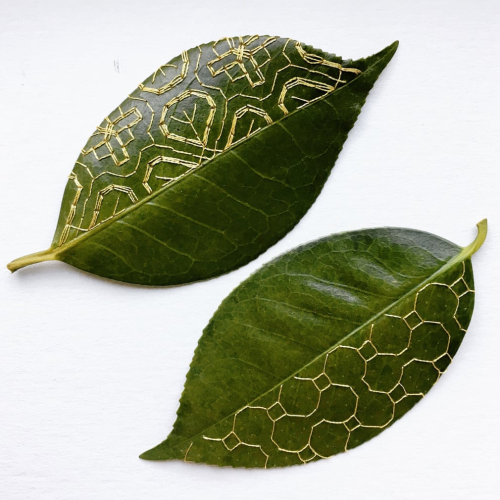 Yet another beautiful example of the intersection of art and science (well, nature anyway:) is the embroidery work of Hilary Fayle - done on a substrate of leaves. You can read about her in a newspaper article here or take a look at her website here. Beautiful, inspiring work! I chose two examples that appealed to me - and happen to be rather geometric in design - but she does luscious flowing organic lines as well. Go take a look and enjoy! :)

QuiltCon was this past weekend and I got rather tied up with that ... and with finishing my class project from last week's Zoom class with Carl Hentsch. Here's my take on Carl's design FoxHole: 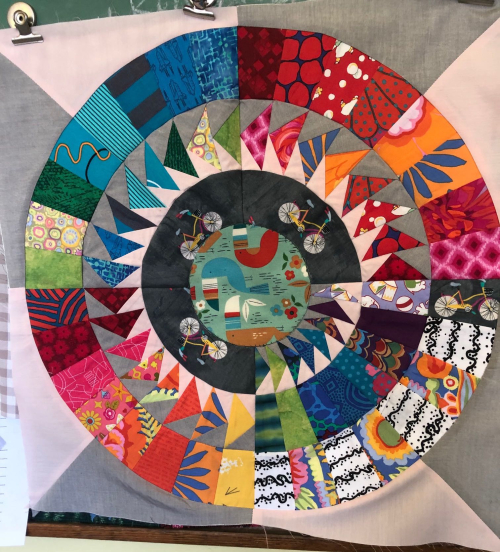 I am really pleased with this piece. Right now it measures about 22" square. I have hung it up on my blackboard and am debating whether to add a border or to finish it as is now. I have to say that I have not done any curved piecing for several years ... but this project went together very easily. I was impressed with myself, truthfully. :)

Look carefully and you might see the fourth bicycle whirling off on the right side ... this kind of reminds me of those big barrel things trick riders show off in at the circus - Wall of Death. LOL!

QuiltCon is the modern quilt movement's dedicated annual convention/show. This year they substituted QuiltCon Together, a completely online virtual show. I was truly impressed with the entire event! I took two half day classes and enjoyed both. The first was with Daisy Aschehoug, Bojagi Inspired Patchwork. The second one was given by Karen Lewis, Screen Print Your Own Quilt. Each of them was an excellent teacher and I learned quite a lot. I listened to each pre-recorded class twice and took careful notes. Now I have to make time to actually do the work. :)

Today was a bit of extra exciting for me. I have not driven more than 5 miles at a time since November 2019. Today I drove down to LaPlata MD to visit Material Girls quilt shop ... a trip of more than 2 hours each direction, all of it along 'superhighway' routes (I95 to I495 to MD 5/301). MG is a Bernina seller and where I bought my personal machine (a Bernina 530). I loaded my Nina into her Tutto case and into my Jeep and off I went. The sun was shining and the temps were in the high 60's (quite a change from the 30s we had three days ago!). It was a pretty day. I must admit I was a bit shaky as the traffic level was what I would call 'normal' (meaning non-rush hour) levels and that is pretty crowded by most standards. Lots of visual stimulation that I have become not used to dealing with. :P

I made it down fine, though (although I did see a major collision about three cars distance in front of me on I95 south). Ate lunch at the nice little deli around the corner from the quilt shop (Apple Spice Junction) - all masked and social distancing. Was a very not-usual day on the whole compared to the past year!

PS.  I almost forgot! This past Sunday, Feb 20th, was the anniversary of the date on which I became a mother 40 years ago. Time whiplash, anyone? It was my daughter's birthday ... and I think she was much more calm with it than I was. :)