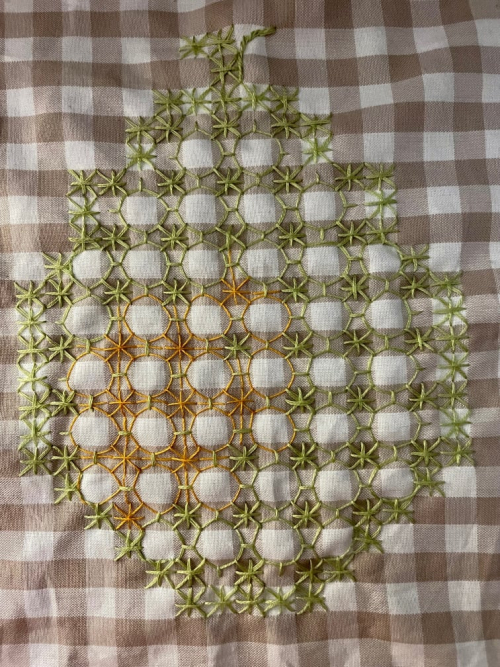 I finished the embroidery on my next chicken scratch block - a pear. I _hope_ this looks at least vaguely like one. :) It is smaller than most of the other blocks I've made so it only took a couple of afternoon sessions to complete. I'm definitely beginning to think about the final quilt layout as I embroider. :)

Today had some highs and lows, achievement-wise. I woke up quite early (for me), at 8:30 a.m. Rather than try to go back to sleep, I actually got up! I faded out around 2 p.m. and had to take an hour for quietly listening to an audiobook while I closed my eyes - but, unlike my more usual pattern, I did not sleep. Who knows why. Sigh.

I decided, having some extra time in my day today, to go out and look for some storage bins (plastic, completely sealing) to hold the various family history related items I have piled in spots around the house (including underneath my newly tidied computer desktop). My first thought was to go to Walmart ... but ... our more-local one is not a nice place and the parking is lousy. The better Walmart a bit farther away just seemed like too much effort. :) I chose to go to JoAnns ETC which is fairly close (2 miles? away) and I know where in the store the bins are to be found (well, I _thought_ I did, but as usual I was wrong).

So ... nope, nothing that 'spoke' to me as a good option. The bins that were likely choices were hugely overpriced compared to the ones I bought two years ago from that A_ place online. Like 2.5 to 3 times as much!!! I like to encourage supporting local businesses (although I do not really consider big box stores to be very 'local' given that most of them do not pay local taxes AT ALL). Still, that kind of markup over online sources is ridiculous (and yes, as a former business woman, I DO know what goes into pricing items for sale).

I tried the nearby Target next ... their prices were slightly lower (maybe only twice as high as A_) ... but there were none of the kind of bins I wanted on the shelves. Sigh. That just-in-time-inventory management algorithm is not working out, imho.

I dropped two letters off at the post office and came back home in disgust from my shopping trip ... and went upstairs to order what I wanted online. I hate that ... but what is a dutiful conscientious consumer to do? I will tolerate local prices being 50 to 75% higher than online but I have my limits (even counting the carbon burden involved in shipping vs. driving my car locally).

On the way home, I stopped at our cluster mailbox and picked up our mail. There was some happy news - I got Stash Bee blocks from two fellow members: 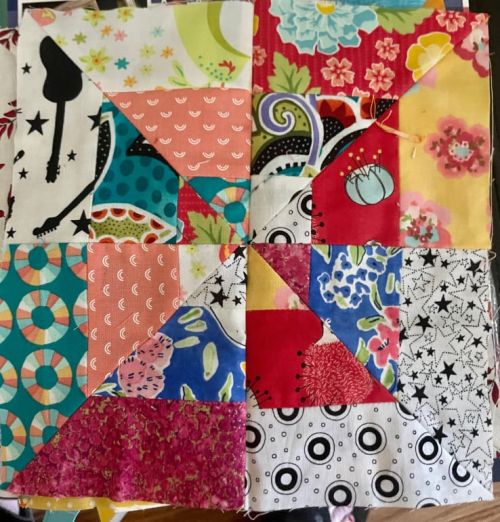 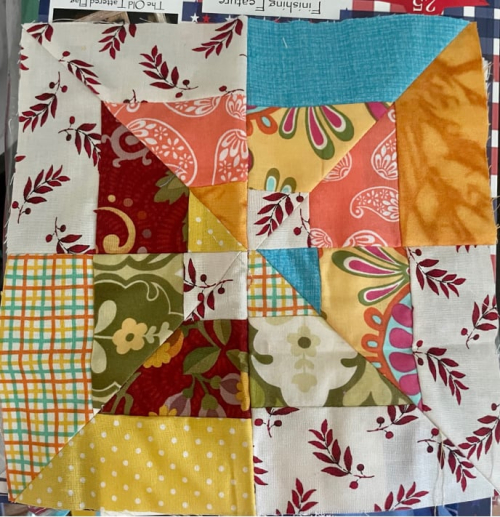 And from Kristen Beck:

(I sure hope I got those two names right! Please forgive me if not? The envelopes are still downstairs and my computer is upstairs.:)

So, you win some, you lose some. Life has a way of evening out, yes?